The Foundation makes grants in support of the Lindback Distinguished Teaching Award to certain colleges and universities primarily in the Greater Delaware Valley area. The stipend for each award is $4,000.

In 2013 (for the academic year 2014), the trustees advised all of the participating colleges and universities of the following changes to the program:

The following are the conditions and terms on which the awards are made. The award shall be given to a faculty member of the participating institution for demonstrated excellence in teaching students, subject to the following guidelines:

One question that comes up from time to time is whether a participating institution may make one or more additional awards by using its own funds. Regrettably, the Foundation cannot permit a college or university to fund the award on any basis except with funds provided by the Foundation. In other words, a condition of each institution's participation in the award program is that it shall not make the award at any time unless it is supported solely by the usual Foundation grant of $4,000. Please note that the award cannot be split among two or more recipients.

The Christian R. and Mary F. Lindback Foundation sponsors an annual award that recognizes outstanding teachers. The Foundation established the Lindback Award for Distinguished Teachers to honor 60 teachers from Philadelphia public schools who demonstrate excellence in promoting learning at the highest levels. The award recipients will be chosen based on their activities that improve the intellectual and character development of students.

The recipients will receive $3,500 and recognition at a spring reception.

A central committee of School District administrators and a Philadelphia Federation of Teachers representative will review and make the final selection for each winner.

The Lindback Distinguished Principal Award, funded by the Christian R. and Mary F. Lindback Foundation of Philadelphia, recognizes and rewards school principals who have made significant leadership and humanitarian contributions to his/her school community.

The recipients receive $20,000 for their school and recognition at a spring reception. 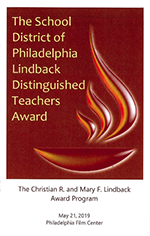 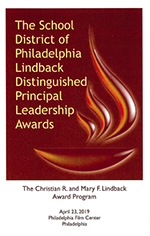